Bizparentz and The Making of An Open Secret 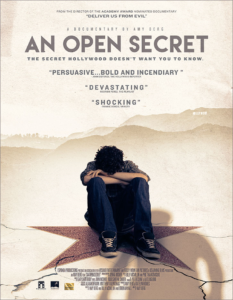 We’ve been called homophobic (we aren’t), and have been stalked, threatened and harassed. Several high profile people mentioned in the film insisted on saying this was a “witch hunt”, an orchestrated attempt at defaming gay men in Hollywood. The reality was much simpler: this was a documentary and the film makers told the stories they saw, as they saw them.

On March 5, 2012 Producer Alex Riguero from Disarming Films contacted Bizparentz to discuss a documentary about child sexual abuse in Hollywood. Director Amy Berg had already done an Academy Award nominated film about abuse in the Catholic Church called Deliver Us From Evil.  They were interested in interviewing us, and in using our files as source material for the film.

A partnership like this was an unprecedented move for Bizparentz and we did not take it lightly.  We keep all our contacts with families confidential, and the core of our mission is to educate families and not villainize them.  We were, and we remain, committed to this.  But the opportunity of a full length feature film allowed us to contribute to a high quality educational tool for families, and to share information that was lying dormant in our organization files.  As a grassroots organization, we simply did not have the resources to fully investigate the claims in our files, much less produce a high quality feature film. Disarming Films had those resources and they shared our vision of social justice. They agreed to digitize our files so that we could easily search them in the future.

We received no payment and no compensation of any kind  for our participation in the film. We did not have creative control over the film.

Over the next few months, we met with the producers many times. We agreed on “rules” that included things like
–Everyone is responsible for their own actions. We won’t artificially protect anyone.
–Only use victims that are willing to speak on camera without shadow.
–No villainzing the parents.
–Victims will be treated with respect and their stories will be honored.

We did not know the identity of the Executive Producers (funders of this film), Esponda Productions, until after the film was essentially complete.

During the years of research and filming, we shared file drawers of notes from parents and research into questionable characters and met with production many, many times.  In addition, Anne appeared on camera as an expert. Amy Berg and Disarming Films were able to invest their resources and investigative skills to uncover stories, and allowed the stories to reveal themselves. We continue to be grateful to Amy and the Disarming producers for their professionalism, especially Katelyn Howe, Peter Clune and Lorien Haynes.

While the Disarming crew continued their research and interviews, Bizparentz was busy working with the legislators to create The Child Performer Protection Act in California, a law that passed during production in September 2012.

During filming, some other serendipitous things happened including:

Then, something more serious happened: the death of a witness and victim, Brian Claflin.  Brian was killed by a Berlin subway train on June 5, 2014, three days after emailing a lawyer about his alleged abuse by producer Gary Goddard.
“Must Reads: A notorious mansion. An alleged assault by a Hollywood producer. A suicide. What happened to Brian Claflin?” By Gus Garcia-Roberts LA Times 5/11/18
“The  Mysterious Death of Brian Claflin – Yes, Gays Are Bullies” 9/18/18
“Mystery of the tragic American, 33, who was killed by a Berlin subway train soon after accusing filmmaker of drugging and sexually assaulting him as a teen” by Keith Griffin, Daily Mail 5/13/18
Brian Claflin Obituary

Things were clearly getting more intense.

In July 2014, the Toronto International Film Festival suddenly decided not to premiere An Open Secret. It was strange at the time, and we started to hear rumblings about powerful men threatening various film festivals where AOS had been submitted and sometimes even accepted.  This article, written in 2018, discusses the TIFF decision.  How TIFF Rejected a Documentary Exposing Sexual Abuse in Hollywood by Graeme Gordon in Canadaland.

On September 8, 2014: New York Magazine published an article about Mike Egan and the settlements made with other victims. “What Happens When You Accuse a Major Hollywood Director of Rape?”  by Robert Kolker. 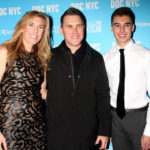 You can read a transcript of our Q & A session after the DocNYC event here,An Interview with Thom Powers, Artistic Director of DocNYC.

Then, things really got wild. The Director and Executive Producer (who actually owns the film) had disagreements about editing. SAG-AFTRA attempted to censor the film and threatens lawsuit, objecting to portrayal of SAG volunteer Michael Harrah who is interviewed for the film and is shown reminiscing with his alleged victim.

Buzzfeed News did a good summary of the problems in this article, “The Hollywood Sex Abuse Documentary that You Almost Couldn’t See” by Adam B. Vary 6/26/15

Meanwhile, friends of those predators profiled in the documentary went into overdrive, trying to attack Bizparentz and us personally. There were social media pages and phone calls to other charities and government entities we work with. Our response to some of that is here, in a newsletter to our Bizparentz families. We will always be grateful for the unwavering support we received from the families of young performers, who know who we are, and who know the truth of child abuse in this industry. Thank you! 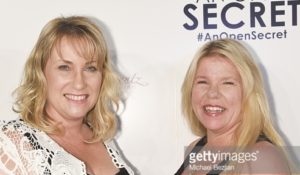